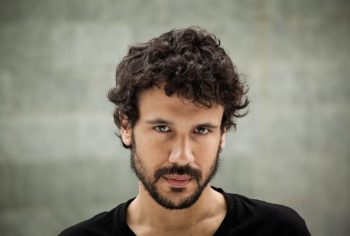 ROC ESQUIUS (Súria, 1982). Actor, playwright and director. He has studied at the Sala Beckett and the Estudi Nancy Tuñón in Barcelona. He is the founder of the Companyia Dara and active member of the Peripècie company, in residence at the Sala Beckett.

He is the author of iMe, El Catalon d’una nit d’estiu, Mars Joan, Els pastorets de la Martina, Claqué o no, Likes, Sàpiens and ELI. The first six were premiered by the Dara company and toured around Catalonia and Madrid. Sàpiens was directed by Sergi Belbel and ELI by Antonio Calvo.

The author combines playwriting and directing with acting, performing at theatres and alternative venues in Barcelona, Catalonia and Madrid together with Sergi Belbel, Guillem Clua and Josep Sala, and Sergi Manel Alonso, among others.

His work in the audiovisual sector includes playing a supporting role in the Catalan TV station TV3’s La Riera for 3 seasons, apart from acting in other drama productions.

Roc Esquius is also an IT engineer and technologist, as well as a leisure monitor with an eclectic range of training.