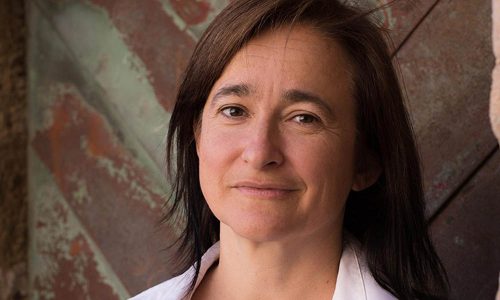 MARTA BARCELÓ (Mallorca, 1973). She graduated in Dramatic Art (specialising in gestural theatre) at the Institut del Teatre in Barcelona. Subsequently, she also studied circus at The Circus Space (London).

Her career is closely linked to that of her production company, Res de Res i En Blanc (now extinct), where she worked as a creator, actress, trapeze artist, co-director and author of her works of gestural theatre, circus and text for twenty years.

At the same time, since 2005 she has been working as a scriptwriter in fiction series broadcast on the Balearic Islands regional television. Among the series she has worked on are Vallterra, Llàgrima de sang, Migjorn, Treufoc and Pep.

She has won the Dramaturgy Tournament of the Balearic Islands with Abans que arribi l’alemany and the Temporada Alta de Girona and the Transatlántico de Buenos Aires tournaments with Tocar mare. She has also written children’s novels (Lúnia, winner of the Guillem Cifre de Colonya Award) and short plays. With the monologue Anar a Saturn i tornar she has won the Palanca i Roca Prize.

Her work has been translated into Spanish, Greek, Italian, English and Rumanian.